In the ongoing game of oceanic cat-and-mouse between shipowners and pirates, one relatively new development is the use of Vessel Protection Detachments (VPD), a practice whereby flag states deploy small teams of uniformed military personnel on board commercial vessels in the Indian Ocean. The Netherlands is leading the way both in terms of conceptual development and resources made available, with the capacity for 100 deployments this year and 175 by next year. Despite this, the shipping industry is demanding a more accommodating attitude on private security. 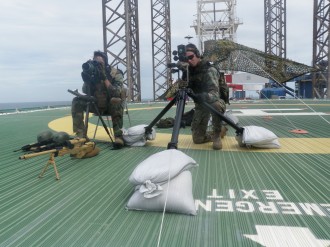 A major impetus for Dutch devotion to the VPD concept has been the rise of maritime private military security companies (PMSCs), particularly in the Indian Ocean. The international anti-piracy missions off the coast of Somalia—Operation Atalanta and Ocean Shield—have proven insufficient given the scale of the threat. This has increasingly led to shipowners contracting PMSCs to provide armed contractors to protect their vessels—including Dutch ship owners.

The Dutch Constitution guarantees the state’s monopoly on the use of force, and as such explicitly prohibits private security personnel from bearing arms. By extension, Dutch shipping companies are not able to legally contract armed security for Netherlands’ flagged vessels.

Formulated in late 2010, Dutch policy has been to make VPDs available to Dutch shipping companies, which was first done in early 2011. Though only 25 VPDs have been deployed to date, their use is rapidly becoming institutionalised in terms of available funding and increasing capacity. The 2012 Defence budget has €23.4 million reserved for VPD deployments, of which shipowners would contribute €11.3 million. At €5000 per team per day, down from €8300, the Netherlands will be able to deploy 100 units this year and 175 in 2013.

The detachments themselves consist of up to platoon-sized teams of regular Dutch Marines. Arms and equipment include .50 calibre anti-materiel rifles, 7.62x51mm general purpose machine guns, 5.56x45mm personal rifles, and state-of-the-art medical and surveillance equipment. The Dutch MoD recently signed an agreement for the use of a Singapore base for the storing of VPD equipment and arms, and is working on similar agreements elsewhere.

But despite this apparent commitment by the Government to providing security, shipping companies are demanding more. Availability of teams is not the problem; in 2011 some 179 Dutch-flagged vessels sailed through Indian Ocean High Risk Area—almost exactly the number of VPDs to be available in 2013. According to shipowners and security industry insiders, the bottleneck is the prohibitively high cost, coupled with the lengthy and complicated application procedure. To qualify, shipping companies will have to demonstrate a commitment to the International Maritime Organization’s Best Management Practices to Deter Piracy and that the vessel in question is particularly vulnerable. They also have to provide additional medical facilities on board at own cost.

Though by its own admission the government recently reduced the cost of VPDs to maintain ‘a level playing field’ for Dutch merchant shipping, the latter are now turning to private security. According to one Dutch security consultant, almost every Dutch owned and flagged vessel sailing between Europe and Asia is now secured by armed contractors. With more reputable PMSCs reluctant to operate illegally on Dutch vessels, Dutch shipowners are forced to contract lesser outfits.

The Dutch government’s refusal to budge on armed contractors has frustrated shipping companies and in July shipping firm Maersk decided to trade the Dutch tricolour on some of its vessels for the Union Jack—to benefit from Britain’s more accommodating attitude on private armed guards. It remains to be seen whether these developments will persuade the Dutch government to reconsider the legal status of private armed guards on Dutch vessels.

Jerry completed a Master in International Security at the University of Sydney last year and is currently Defence Intern at the Lowy Institute for International Policy. The research and views expressed are exclusively his. He may be contacted at ghof3560@uni.sydney.edu.au

(Image courtesy of the Dutch Ministry of Defence).

‘When you have to kill a man it costs nothing to be polite’. Cancel reply